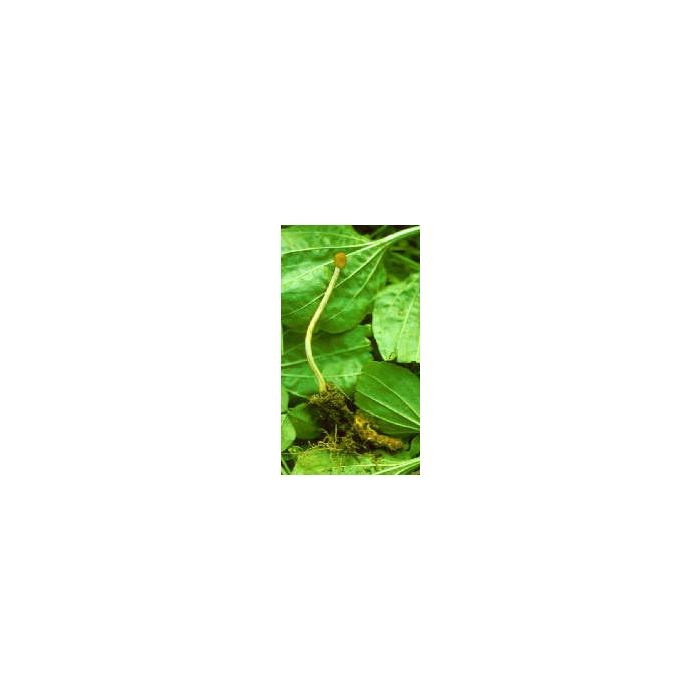 Plant Description: Cordyceps can only be found in isolated places in the harsh environment of southwestern China, in some dozen localities in Norway, and in very small amounts in Finland and Sweden. The species has been said to have a scattered distribution in Europe, as well, but this is uncertain. Cordyceps gracilis is vernal (April in the lowlands) to aestivial (July-August in prealpine areas). Wild cordyceps is usually very expensive due to the very small production, and can cost up to $1000 for 100 grams. Cordyceps gracilis grows on the caterpillar larvae of the Lepidoptera order of insects, specifically moths belonging to the genus Hepialis. It is presumed that once encountered by a suitable host, part-spores germinate and penetrate into the larva. The fungus proliferates and infiltrates the circulatory system and finally kills the larva. The fungus usually turns up on the same locality every year.

Interesting Historical Notes: Over 1500 years ago, the meadow region of the Tibetan Himalayan Mountains were covered with a variety of grasses and flowering plants. Cattle and sheep grazed in this area and were particularly drawn to an unusual mushroom-like grass. In time, the herdsmen began to see a marked difference in the strength and agility of their herds. They were curious about the ingredients of this grass, and wondered if perhaps that was the cause of the increased vigor and vitality of the animals. Word spread quickly and a few traditional Chinese doctors began gathering some of this grass to treat their patients. The grasses proved to have many medicinal functions for a variety of diseases for which previously they were unable to treat. It is believed that this is how Cordyceps was discovered. Word of the unusual and somewhat mysterious effects spread worldwide and passed from generation to generation. More than 1000 years later, the Ming Dynasty's court physicians began a study of the Cordyceps formula and eventually improved on its usage. Cordyceps became a respected drug. It was named "Dong Chong Xia Cao Tochukas", or winter-worm summer grass. Today, after studies have been conducted with modern techniques, we know that Cordyceps is a parasite which invades the body of caterpillars and eats the soft tissue.

Cautions & Interactions: Do not take during pregnancy or while nursing. Keep out of the reach of children.