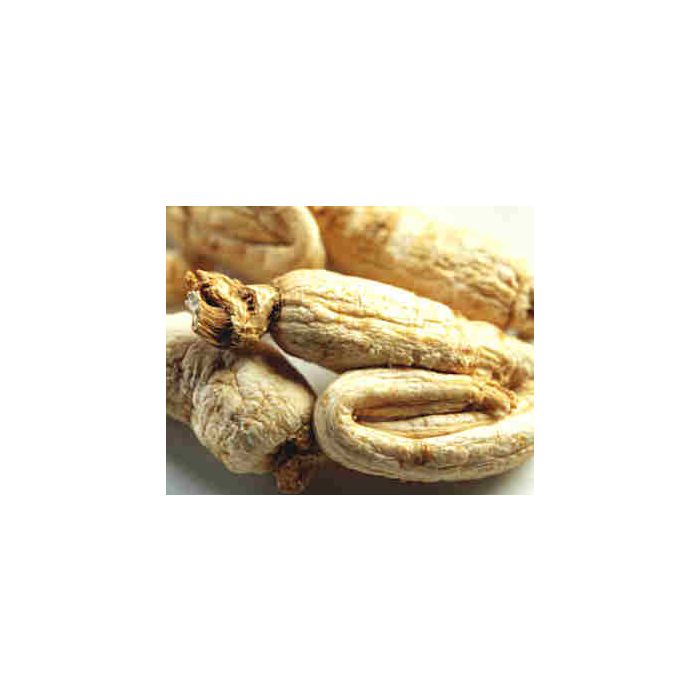 Plant Description: Red Chinese Ginseng is a perennial plant native to the mountainous forests of eastern Asia and cultivated in China, Korea, and Japan. It has a thick, spindle- like brown-yellow root, often divided at the end. It's stem is a simple glabrous type and bears a whorl of three or five compound leaves. The leaves are oblong-ovate, finely double- toothed. Red Chinese Ginseng blooms from June to August. The greenish-yellow flowers are umbrella-shaped with small, edible drupe-like red berries growing from the center. The root is the part of the plant used for medicinal purposes. Wrinkles around the neck of the root tell how old the plant is. This is important because ginseng is not ready for use until it has grown for four to six years. It has been in use as a folk medicine and tonic among the peoples of China, Korea, Thailand, Viet Nam and Manchuria, as well as among Native Americans, for untold thousands of years. Frequently used as a potent preventative rather than a curative, it has also demonstrated tremendous therapeutic benefits for a variety of diseases and conditions.

Panax, or Red Chinese Ginseng, is an adaptagenic herb. It has been known to enhance the body's resistance to external stresses and improve physical and mental performance. Acting on the central nervous, cardiovascular, and endocrine systems, it promotes immune function and increases metabolism. Red Chinese Ginseng increases vigor, energy, vitality and resistance to illness and environmental stresses. It also increases the stress hormone ACTH from the pituitary that helps the body adapt to stress. Due to the hormone-like substances in the plant, it has simultaneous sedative and stimulating (adaptogenic) effects on the central nervous system. Red Chinese Ginseng improves the responses of the adrenal cortex in secreting the stress hormones, possibly by interacting with receptor sites at the cortex and at the hypothalamus, variously stimulating and relaxing the central nervous system. Ginseng has had beneficial effects on women suffering post-menopausal symptoms, and has demonstrated clinical improvements in virility among men, and effected improvements in conditions of sexual dysfunction for both sexes. It has been found to have a beneficial effect on carbohydrate tolerance in diabetic patients. In general, Red Chinese Ginseng improves the balance of functions in the body. Ginseng will help the body to cope, thereby assisting in many chronic diseases, especially if debilitating and wasting. It is a valuable general plant drug for geriatric care. It has been used in China to help alleviate pain during childbirth. It is also helpful for coughs and colds and other congestion problems.

Efficacy Studies & Other Clinical Data:
Helpful Links:
Disclaimer (U.S. Only): These statements have not been evaluated by the FDA. These products are not intended to diagnose, cure, treat, or prevent any disease.